It’s possible to feel multiple emotions at once, and this can make it quite difficult to understand what you’re actually feeling.

Failing to understand where your emotions are coming from can be quite troublesome, as emotions dictate how you react to different events.

So, to understand the variety of complex human emotions, it’s important to learn the basics.

With the help of Plutchik’s emotion chart, you’ll be able to identify what’s going on within.

What Are The 8 Primary Emotions?

People are hard-wired to feel eight primary emotions as a response to what happens around them.

All other emotions come from a combination of these primary emotions. This theory was introduced by Robert Plutchik who developed the emotions wheel, a famous tool that simplifies and illustrates complex emotions.

Primary emotions are strong enough for you to recognize instantly. That’s because they’re often easy to interpret and influenced by the way you perceive the world around you.

But keep in mind that it’s not often that we feel just one primary emotion at a time.

And even though Plutchik‘s theory is widely accepted, experts don’t take it for granted, as this would oversimplify something that’s actually quite complex.

Instead, they categorize some of the basic emotions as secondary emotions, as they’re often intertwined. Anger is a perfect example of this. 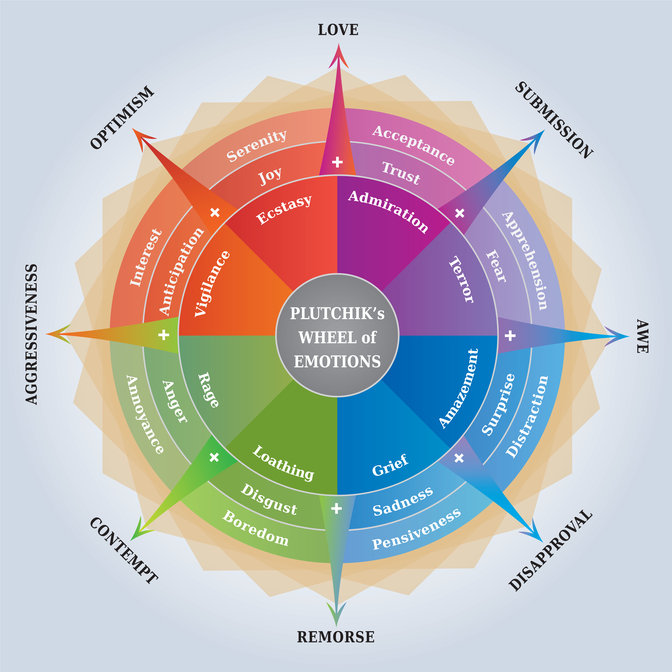 What are the emotions behind anger?

Anger is a primary emotion. And yet, anger often hides different emotions behind it. This is why people sometimes refer to anger as a secondary emotion.

Anger can stem from a variety of negative emotions such as shame, guilt, distrust, helplessness, and more. In fact, it’s your mind’s inability to deal with events around you in a productive manner.

Anger is our natural mechanism for protecting raw, overwhelming feelings. And this is why people who have a hard time regulating their emotions are prone to anger outbursts.

To learn how to deal with anger, you must first learn to control the underlying emotions.

What Emotion Is The Opposite Of Fear?

Create the emotions you most want to experience.

If you need more proof of the innate complexity of emotion, just try thinking about the opposite of fear. Is it courage? Love? Acceptance?

Depending on who you ask, all of the above could be true. Really, there’s no right answer to this, as fear is an extremely complex emotion all on its own. Sometimes it occurs out of nowhere, and sometimes it’s the result of our previous experiences.

According to Plutchik, the opposite of fear is anger. And this makes a lot of sense considering these two emotions can trigger completely different bodily sensations.

Fear can freeze you, while anger makes you feel like your blood is boiling. Even though this duality makes sense, to say that anger is the only opposite of fear would be another oversimplification.

How do we use emotions?

You feel many different emotions in your everyday life. They help you make nearly all your decisions, from what to wear to whether to quit your job.

Different types of feelings all serve an important purpose in your life. They help you connect with and understand others, which is essential to any relationship. It’s in our nature to strive towards meaningful relationships, and they wouldn’t be possible without emotions.

Emotions also motivate us to take action, both good and bad. They allow us to respond to things that happen around us and to adapt to changes. Almost every action is driven by emotion. Life as we know it wouldn’t be possible without them.

You either rule over your emotions or are ruled by them. But luckily, there are many things that you can do to make sure you’re the one in the driver’s seat.

By inspecting your emotions carefully, you can take action that allows you to stay in control of how you respond to the world around you.

Make Your Life Better, Starting Today
Learn to honor yourself. The world is full of opportunities, but sometimes too much thinking

EMPATHY VS. SYMPATHY: WHAT’S THE DIFFERENCE?
What’s the difference of empathy vs. sympathy? While they are often used interchangeably, there are

Emotional Intelligence – What is it and why is it Important for your Business?
Undoubtedly, an effective leadership is critical for achieving business goals. In the modern workplace characterized